Oh dear. I appear to have started yet another project. 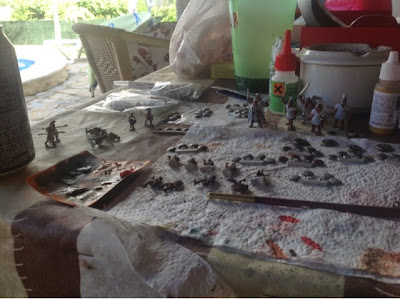 I've just been on holiday, and there's nothing more relaxing than painting by the pool.
These are Xyston 15mm Peloppenesian war era miniatures. I was given the box set as a gift waaay back, and they all fit, along with paints, glue, knife and brushes into a modest 25cm x 25cm x 15cm box. At Sheffield triples I supplemented them with some support units, so they went in too. The other 28mm Greeks are the aforementioned (in 28mm WIP02) Jason and the Argonauts miniatures from Foundry.
The four standing hoplites and the over-the-shoulder lad were done on my 6mm Greek project when I was last on holiday in 2011. The advancing miniature is from chariot, I think.
The four riders at the front are heavy cavalry in boiotian helmets and cuirass. I've painted them as mercenaries as I don't think the Spartans relied too much on cavalry at the time I've aimed for (418BC). 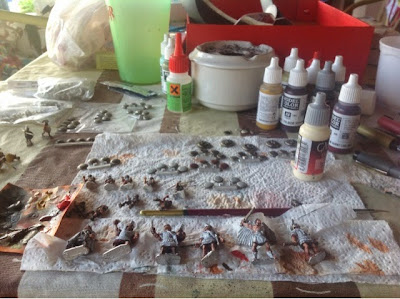 Just started on the 28mm figures I brought along for 'thematic light relief', much the same reason as I took the 15mm stuff I worked on when doing the 6mm project for. Painting multiples can be very tedious at times and I find a scale break can revitalise things.

I am back from my Internet-free holiday now, and I can report that although I completed a fair bit, I still have much to do. These may well progress alongside counterpart 28mm units in the other project.

A lot of cavalry there for an infantry-heavy army, but I wanted to cover options.

Undercoated, we have;
40 hoplites
4 psilioi
2 slingers

And in various stages of production;
4 hoplites
4 commanders and musicians
8 mercenary hoplites.

Still a lot to do, but it's going well.