Dystopian Wars: Kingdom of Britannia vs Republique of France 1000pts

1000points each means both field dreadnoughts, but no air power other than the obligatory 10 tiny tiny flyers. Both KoB are CAPs, whereas RoF field a Torpedo bomber flight and a CAP.

The objective is to destroy core fleet. And they're off! Minimal terrain covers the Britannian right flank, but the French have a plan to skim over it. This plan is quickly abandoned when the heavy Brit left flank open fire.

Dunc is eager to try his heat lances and manoeuvres his heavy hitters toward Charlie's dreadnought and battleship.

A fierce exchange of fire over the first three turns bag a cruiser and three frigates for Britannia, but a more impressive four destroyers, a cruiser and a frigate fall under the French onslaught. There's serious damage to the Magenta mkII and the Ecuyers though.

Turn four and things start to get nasty. Two KoB cruisers attempt to board a RoF cruiser, and with a swift exchange of cards are repelled! Meanwhile a line of KoB frigates unleash 20 dice on the Magenta mkI.
The French are feeling the pressure as the Majesty class unleashes 25 dice on the beleaguered Magenta mkII, which miraculously survives on 1HP. This proves extremely fortunate on the next turn when it delivers a critical with its redoubtable heat lance! An unfortunate boarding attempt is easily massacred by the dreadnought's CAP, however.


A final round or two of firing saw two French cruisers down and a KoB frigate but the hour was late. A largely disabled KoB dread (7 damage and two half AD counters) faced a ready-to sink pocket battleship and a RoF dread with one hit, so there was still life in the battle, but a marginal KoB victory was declared as he was much closer to the objective.

All parties had jolly good fun, hands were shaken and North duly faced.

I think there will be more painting of DW models in the near future. 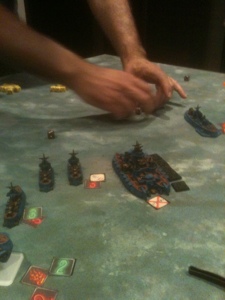 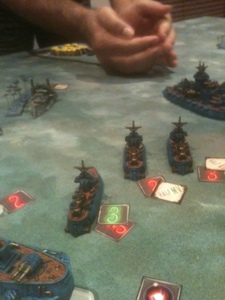 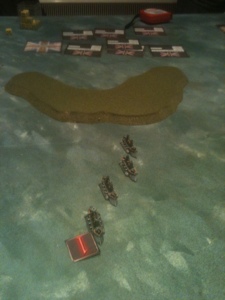